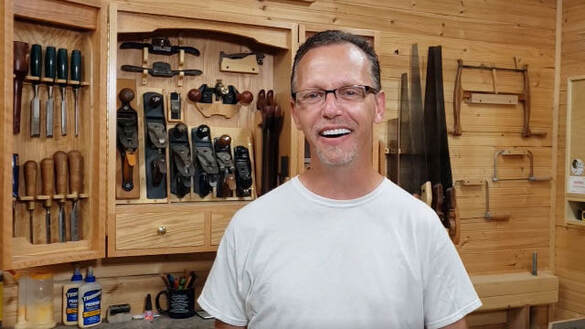 Tommy is the proud father of six children, and grandfather to eleven amazing children. A woodworker, a maker, a vlogger, and the host and creator of The Shavingwood Workshop found on youtube.
Born 1968 in Elgin Illinois, he lived his childhood years in Carpentersville. Until his Mother and Father moved the family to Brainerd Minnesota, where they purchased a resort on Gull lake.  Living on a resort was dream come true for Tommy as a young boy, but as the years went on the family eventually made what would be their last move and settled in Farmington Minnesota. Tommy remand in the Farmington area after high school eventually meeting his now wife Rachel. Together they raised six children and found themselves settling down just south of Rochester Minnesota, where they reside today.
​
Tommy's passion is introducing people to woodworking and the ability to create anything from a board.  Tommy believes that with a little imagination and by believing in yourself you can build anything, and he shares this message of encouragement with ever person he meets with his simple message   " Build Something Awesome " .